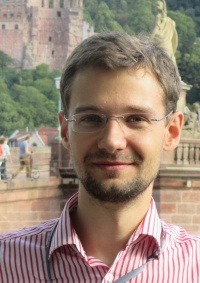 For a convex domain $D$ bounded by the hypersurface $\partial D$ in a space of constant curvature we give sharp bounds on the width $R-r$ of a spherical shell with radii $R$ and $r$ that can enclose $\partial D$, provided that normal curvatures of $\partial D$ are pinched by two positive constants. Furthermore, in the Euclidean case we also present sharp estimates for the quotient $R/r$. From the obtained estimates we derive stability results for almost umbilical hypersurfaces in the constant curvature spaces.

A.A. Borisenko, K.D. Drach Comparison theorem for support functions of hypersurfaces // Reports of the National Academy of Sciences of Ukraine, (3): 11-16, 2015

For a convex domain $D$ that is enclosed by the hypersurface $\partial D$ of bounded normal curvature, we prove an angle comparison theorem for angles between $\partial D$ and geodesic rays starting from some fixed point in $D$, and the corresponding angles for hypersurfaces of constant normal curvature. Also, we obtain a comparison theorem for support functions of such surfaces. As a corollary, we present a proof of Blaschke's Rolling Theorem.

K. Drach About an isoperimetric property of $\lambda$-convex lunes on the Lobachevsky plane // Reports of the National Academy of Sciences of Ukraine, (11): 11-15, 2014

We give a sharp lower bound on the area of a domain that can be enclosed by a closed embedded $\lambda$-convex curve of a given length on the Lobachevsky plane.

For embedded closed curves with curvature bounded below, we prove an isoperimetric inequality estimating the minimal area bounded by such curves for a ﬁxed perimeter.

We give a sharp lower bound on the area of the domain enclosed by an embedded curve lying on a two-dimensional sphere, provided that geodesic curvature of this curve is bounded from below. Furthermore, we prove some dual inequalities for convex curves whose curvatures are bounded from above.

For a Riemannian manifold $M^{n+1}$ and a compact domain $\Omega \subset M^{n+1}$ bounded by a hypersurface $\partial \Omega$ with normal curvature bounded below, estimates are obtained in terms of the distance from $O$ to $\partial \Omega$ for the angle between the geodesic line joining a fixed interior point $O$ in $\Omega$ to a point on $\partial \Omega$ and the outward normal to the surface. Estimates for the width of a spherical shell containing such a hypersurface are also presented.

We estimate an angle between the radius vector from the inner point of the closed regular curve and its outer normal depending on the distance between the point and the curve. The cases of the complete connected two-dimensional manifold with constant and non-constant curvature were considered.

Using the notion of a limiting angle we prove a version of the classical Bolyai - Gerwien theorem for unbounded polygons on the Euclidean plane.

Given any equivelar map on the torus, it is natural to consider its covering maps. The most basic of these coverings are finite toroidal maps or infinite tessellations the Euclidean plane. In this paper, we prove that each equivelar map on the torus has a unique minimal toroidal rotary cover and also a unique minimal toroidal regular cover. That is to say, of all the toroidal rotary (or regular) maps covering a given map, there is a unique smallest. Furthermore, using the Gaussian and Eisenstein integers, we construct these covers explicitly.